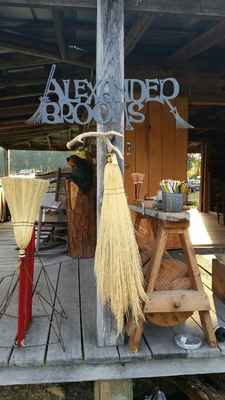 Raised in the mountains of Virginia when self-sufficiency was the norm, the Alexanders have been making Appalachian handcrafted brooms for almost half a century. Utilizing the best of mountain traditions, the Alexanders add their own touch to each broom.

Each little community often had a family that made brooms. These families kept the broom making craft alive. In our native Rockbridge County we found 5 families that had a history of making brooms. Great Aunt Draper Fultz told stories about the broom maker who came by their farm to barter his brooms for the broom corn crop they grew.

As students at Berea College in the 1970s, broom making was my student labor assignment. In the Berea College Broom Craft shop I learned under Johnny Reed who had learned broom making from an older gentleman who had grown up at the Shaker Village at Pleasant Hill.

We have attended many craft and fine art festivals over the years winning best in show awards at several. More importantly, we have conducted many workshops over the years to pass along this craft to others. We are available for workshops and demonstrations.

We now sell mainly through the Market, Galleries, and word-of-mouth.

Mission: To clean up the earth one sweep at a time.

We thank you for your interest and support of our efforts to bring you the healthiest, the freshest and the most delicious locally-produced foods possible.
This market is using the Locally Grown online farmers market system. More information about how your market or farm can also use this system can be found at locallygrown.net/faq. Legal information about using this website can be found at locallygrown.net/legal.